Where will you be when the world ends? When it comes to apocalyptic movies, the beginning has always been my favorite part. Sure, its fun to see the aftermath, what the world looks like when the dust settles, but what I find absolutely intriguing is what happens in those defining moments when normalcy gets flipped on its head. This is a huge reason why I’ve always enjoyed George A. Romero’s films. Night of the Living Dead and Dawn of the Dead are (among other things) about what happens in the moment when the world ends. Day of the Dead and Land of the Dead are films about how people are doing after-the-fact. Good movies, but they’re missing that special punch. As we discuss Diary of the Dead, let that defining question sink in, that is, What will you do when the world ends?  END_OF_DOCUMENT_TOKEN_TO_BE_REPLACED

PLANET of the DEAD continues…

Huge thanks to my friend Travis Eck for designing all these awesome original covers. And my new editor, Chad A. Clark. And of course to the man Duncan Ralston for spearheading Shadow Work Publishing and taking on all these flesh eating tales.

Following the events of Planet of the Dead, survivors of the expanding outbreak take shelter in homes and bunkers and apartment complexes. Across the world, armed police and military struggle to maintain safety. Tensions mount as the worst imaginable comes to pass when nuclear weapons are used on civilian populations overrun with the living dead. Soon afterward, a coup mounts between warring factions of Generals, ruining the best-laid plans of two AWOL soldiers, a cybernetically enhanced veteran, and a scientist, forcing them to fight both humans and flesh-eating hordes of undead as they seek refuge from a planet plagued by war.

“This is the end of the world as we know it…”

Available on eBook, paperback, and audiobook 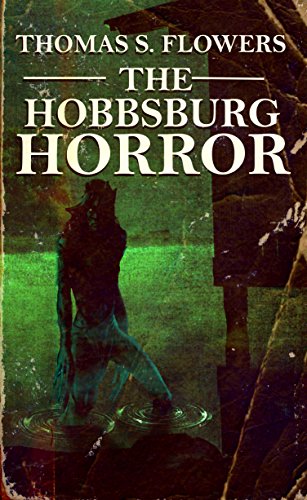 From the author of FEAST and REINHEIT comes a collection of 9 dark fiction stories inspired by the works of H.P. Lovecraft.

They Came to Gordium an elderly man is haunted by the crimes of his past.

Immolate a widower detective struggles to solve the connection between a series of eerily similar suicides.

The Hobbsburg Horror is a Lovecraftian tale of a weary reporter pulled into an otherworldly story of murder and a lodge with reports of strange colors at night.

Hobo a well-to-do housewife’s picture-perfect life is shattered by a home invasion.

Are you hungry, dear? down on his luck divorcee Jacob Miller, after consuming a free pizza is possessed by an internal parasite.

From the Sea is a tale of an amateur sailor and his wife who are besieged by creatures that come from the sea during a storm.

Neon Fortune Teller Madam Drabardi reads the future of paranoid businessman Ronald Murray who believes his wife is cheating on him, but infidelity is not all Drabardi sees.

Nostos Katherine Adonis journeyed light years to escape the nightmares of her past, but some ghosts can never be escaped.

“…extraordinarily enthralling novel which weaves from contemporaneous society into the future and back to the early 20th century American culture and the Great War” -The Haunted Reading Room.

“…an unique take on the Dracula legend with some great historical aspects to it” -Amazon Reviewer.

In the year 2044, reporters from the Public Relations Ministry gather at the home of Benjamin Harker, the last surviving member of the Harlem Hellfighters. At the age of 144, he is the oldest recorded man alive.

Hidden among them, Clyde Bruner is looking for a different kind of story. Across the United States, despite the Great Walls and patrol drones built to keep America secure, something has found its way in. And now towns are vanishing during the night. Entire populations, gone. Only to return after the sun sets, changed, unholy, and lethal. And whatever this evil is, its spreading west.

According to a bedtime story Bruner’s grandfather told him when he was a boy, Benjamin Harker has seen this before. He’s faced this scourge. Fought this evil. Survived them. Killed them. From the trenches of the Great War to the jungles of Vietnam to the sands of Iraq, Harker will search his past to save our future. But as each city light extinguishes across the country, is there no time left to stop what’s coming?

One of the best things about the Zompoc sub-genre is how widely diverse it is. You can go old school with some classic black and white voodoo hexes, such as White Zombie, I Walked with a Zombie, or The Plague of the Zombies, to name a few. There are the comedies, such as Shaun of the Dead or Zombieland or Return of the Living Dead. And there are the more serious minded zombie movies such as the works of the late great George A. Romero and all those wonderfully directed Italian zombie flicks (a good number of which will be reviewed during this year’s Fright Fest). But then you’ve got those Zompocs that are a bit harder to classify. Take for instance today’s morsel, PLANET TERROR. Upon my first screening it was hard to understand where this movie was coming from and where it was taking me. I mean, was it satire? Not completely. Was it serious? Not entirely. Was it expressionist, like those gritty foreign-made horror flicks? Not absolutely. Well, for crying out loud, what precisely is PLANET TERROR?

Before we begin, here’s an IMDb snapshot of the film:

“After an experimental bio-weapon is released, turning thousands into zombie-like creatures, it’s up to a rag-tag group of survivors to stop the infected and those behind its release.”

While we all can love and respect IMDb for providing once again a very in-depth analysis, that’s not entirely the plot of the film. The first part is spot on, there’s an opening with a shady looking group of gas mask wearing military folk lead by none other than Bruce Willis (playing the part of Lt. Muldoon) meeting secretly with another group of shady looking folk of the middle-eastern variety known in the film as Abby (played by Naveen Andrews). There’s an exchange that’s being made and like any good horror story, said exchange does not go as planned and the toxic chemical is released.

Also like any good horror story, there’s a gang of characters, each with their own history and who somehow or another get tossed together and must figure out a way to survive. Shortly following the military-toxic gas release, we get to meet some of those characters. The main protagonist is Sherry Darling (played by the babelicious Rose McGowan), a stripper who wants more out of life. Her dream? To become to the world’s best comedian. Seriously, no joke. And then we have Doctors William (played by Josh Brolin) and Dakota Block (Marley Shelton) whose seemingly happy American lives are not so surprisingly more than they seem. Dakota has a secret. She wants to escape. But there are some…complications. First, hubby Brolin has a healthy dose of paranoia that his beautiful wife is up to no good. Secondly, the zombie apocalypse is about to turn their little Texas hospital into a circus show of exploding boils, bite marks, and severed limbs. And lastly, Dakota’s secret lover, ex-girlfriend Tammy, breaks down in front of The Bone Shack and is eventually eaten…you know, zombie apocalypse and all. 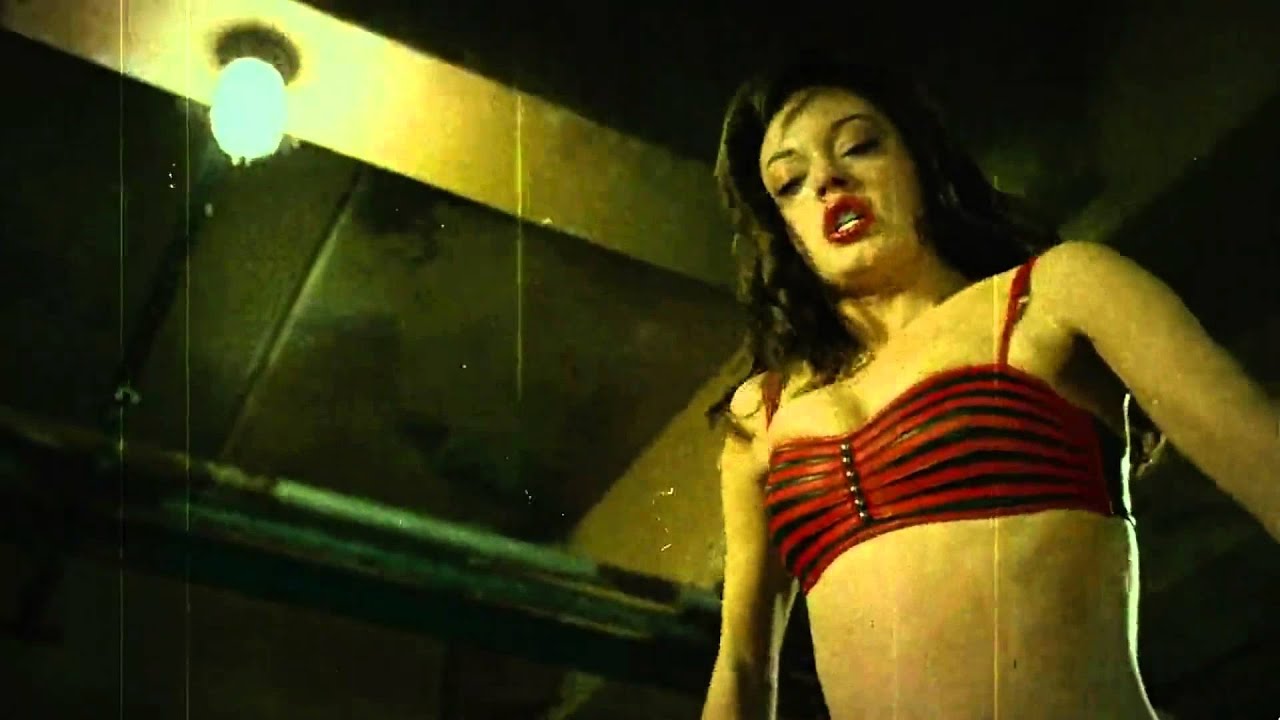 There are other characters who add their own variety of flavor. There’s Wray (played by Freddy Rodríguez) an ex-gang mechanic who is pretty much the predominate badass until Sherry Darling takes his place. There’s J.T. Hague, the proprietor of said Bone Shake and also holds the secret recipe to the best damn barbecue sauce. There’s also Sheriff Hague (played by Michael Biehn) and his team of deputies, including the incredibly Tom Savini playing the part of Deputy Tolo. And there are more, of course. This is a Rodríguez-Tarantino joint film after all.

As we’re being introduced to the characters, random zombie attacks begin spreading throughout this little sleepy Texas hamlet. Eventually spilling over into the life’s of our heroes. Said attack ends up forcing Wray to wreak his truck and Sherry getting her leg torn off. I should mention here, PLANET TERROR does not lack in gore, in fact its one of its redeeming qualities if you ask me. Following the wreak, Wray ends up getting locked up in the local jail cause of his past history. Sherry ends up in the hospital, one leg short. And the world around them seems to be imploding. Doctor Brolin discovers enough evidence of his wife’s planned marital abandonment to take action, injecting her with her own anesthesia tools to keep her…pacified while he deals with whatever is going on with his hospital.

Like any good zombie movie, things quickly escalate. Soon, the entire hospital is in utter chaos. The patients are turning into flesh eating manics. The dead are coming back to life, so to speak, and attacking the living. In the ensuing battle, Wray arrives, freshly escaped from jail, and fashions a wooden peg leg for Sherry and tells her to suck to it, more or less regarding her currently one-leg short predicament. As Wray seems to be not only an ex-gang member, but also a freaking ninja, he shortly secures their escape and a band of survivors make their way to…that’s right, to the Bone Shack. There are “missing reel” effects throughout the duration of the movie which add to the effect that we’re watching a classic grindhouse picture, and so certain scenes end up jumping ahead or “flash forwarding.” Personally, I’m a big fan of jump scenes, so long as they are done right. Chronologically trudging forward can hinder the pace of  a movie, especially a horror movie. But toss in a few flash forwards and you can keep that momentum going.

Needless to say, the survivors end up getting captured by the military who are still up to their no-good tricks. Our heroes hash out a plan to escape. Not everyone does. But hey, its a horror movie. We should be so lucky anyone escaped. You’ll have to watch the movie to find out though, I’m not going to tell you. Sorry.

As far as reviewing this beast of a film, I’m finding it difficult to list anything I didn’t like. And for those you know my taste for zombie movies may or may not find that surprising. On one hand, I’m what you call a Romero-purist. I like my serious slow paced zombie movies that follow the guidelines George A. Romero had established in his Dead Trilogy (Night, Dawn, Day). I’m not a huge zombie-comedy fan. But…there are exemptions. If done correctly, with purpose so to speak, I can get behind zombie-comedies. Return of the Living Dead (1985) is one of my favorite zombie movies. Gloriously over the top gore and packing one of the hardest nihilistic punches ever seen on film. As for PLANET TERROR, its not entirely comedic. It certainly doesn’t take itself too seriously. Fundamentally, its just a fun film catering to those with certain appetites when it comes to horror. 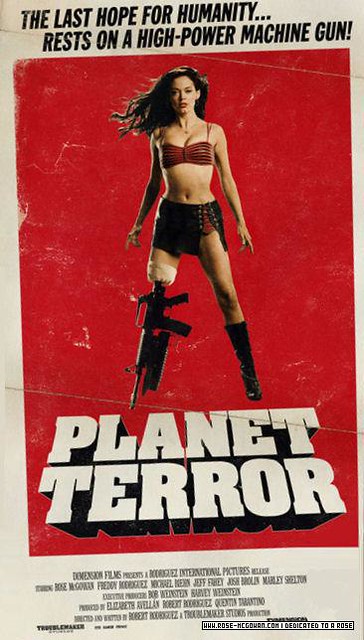 PLANET TERROR is like someone had tossed in Dawn of the Dead, 70’s grindhouse, 80’s splatter, Japanese body-horror, and blended it on high with a dash of kung-fu. The fact that director Rodríguez gave Sherry a machine-gun prosthetic leg gives a sampling of what we’re getting here. Mayhem. End of the world gore and violence and death. But not necessarily nihilistic. There’s an end “future” scene that has a PLANET OF THE APES kinda vibe to it as humanity turns back the clock and goes nomadic in order to survive in this new undead world. My advice, you need to add this now classic zombie flick to your list of must watches for Octoberween.