Characters are extremely important. Situational development is also equally important. Without solid believable characters or situation all you have is scenery. Pretty scenery combined with poetic languid soliloquy could do the trick for some novels. For others, its detrimental to show the story through the actions of others. Teaching something, questioning something valuable whilst simultaneously entertaining. I suppose it really depends on the kind of book you’re writing and what type of writer you are. Stephen King is a great example for character development. He doesn’t mix prose, he gets you into the heads the players in his stories. While Erich Maria Remarque draws in his readership with extremely well painted scenery and descriptively constructed prose.

What kind of writer are you?

What kind of reader are you?

Personally, I enjoy both styles of storytelling. I love getting inside the heads of the characters in the books I read. And I also love being painted a scene. I respect anyone with the talent for words that ensnare the mind and bewitch the imagination. What I read typically inspires what I write. I understand the importance of realistic and sympathetic characters whilst also keeping languidity in the back of my mind. What I write ought to be enjoyable to read, not some chore. If its a chore, good god what am I doing here, right?

This past summer, inspired by one of my favorite Shakespearean plays, Titus Andronicus, I set out to create just that: to bewitch my readers with real people juxtaposed with expressive situational scenery. Maybe a bit twisted to admit, but I had a lot of fun writing this book. Twisted due to the nature of the play…and its very gruesome developments. The story and the characters that came out in this book pushed me into worlds and internal thoughts I have not dared to imagine before. While I do enjoy conjuring fantastic monsters, FEAST reminded me of the most horrifying of all horror monsters, humanity. Big shout out to my friend Travis Eck who came up with the design for the cover. I simply gave him a concept and he ran with it. Producing his own creation and artwork. Totally blew me away, as always, with his work and talent. He also did the cover for Reinheit and PLANET OF THE DEAD. Thanks is in order for Jeffery X. Martin for editing my blasphemous use of the English language. And shout out to my favorite Canadian author and friend, Duncan Ralston, for not only helping me with the formatting of this book but also inspiring me to delve into this subgenre (sewer) of horror I have only previously flirted with.

Some of the characters that will (hopefully) ensnare you…

Titus Fleming is the owner of Big Butts Bar-b-que and a father of three sons. His restaurant and “brand” is highly successful and a popular hot spot among the residents of Bass and Sat. But when one of his son’s commits a horrendous crime, the legitimacy of his name and business comes under question. He’s a simple east Texan struggling to keep both his buiness afloat and his relationship with his transgender son.

Tamora Lange is the mother of two nitwit sons and a daughter. She’s what you would consider to be a “gold-digger.” And her sights have been set on Titus’s Big Butts Bar-b-que kingdom. She’ll do just about anything to get her way including manipulation, seduction, and perhaps even murder…

Lavinia (Luke) Fleming is the son (daughter) of Titus Fleming. He (she) struggles with his own identity the responsibility his father thrusts upon him after the deaths of his (her) brothers. He hates the notion of gender but is forced to make a choice between being who he really is and who his father wants him to be.

Aaron works for Tamora and is secretly both Lavinia’s and Tamora’s lover. He hates both families without prejudice and would want nothing more than to see both houses burn.

Darren is Titus’s longtime friend and lawyer. He wants to help his friend grieve for the loss of his two sons while at the same time protect what’s theirs from greedy parties.

Chad & Drake Lange are the homophobic sons of Tamora and are both equally horrendous. They loath the Fleming family, especially after what Titus’s second son had done to their sister. And are appealed when they hear of the proposed arranged marriage between her and Titus’s surviving freak son Lavinia (Luke). They are more than willing to do what needs to be done in order to please both mama and their own murderous appetites.

The Mayors of Bass & Sat are the political heads of two feuding towns on a cross roads between Big Butts Bar-b-que. Bass is made up of nothing but farmers and bankers, while Sat is suburban and more populated. Both claim a stake in the barbecue enterprise and will do what they deem necessary to keep their residents’s bellies happy.

Here’s what reviewers are saying about FEAST:

“Two crazy red neck families fighting over a Barbecue business leads to a bloody, backwoods Texas battle, resulting in carnage and mayhem. Gruesome, bloody, and sadistic, and written like something Herschel Gordon Lewis would release at the drive-in, this is a colorful, entertaining, and fun read. I loved it!” -Randy Bates.

“Knowing that this book is based in ‘Titus Andronicus’ by Shakespeare I was already expecting a gruesome tale, but I have to say that there was even more gore than I expected. The rape scene was one of the crudest I have seen in books, even though, some details were skipped” -Amazon Reviewer.

“These individuals and families might be from a tiny patch in rural Texas, but their currents run very, very deep…I expect I will have nightmares for quite some time. What a story!” -Haunted Reading Room.

FEAST is available on eBook, paperback, and audiobook on Amazon. 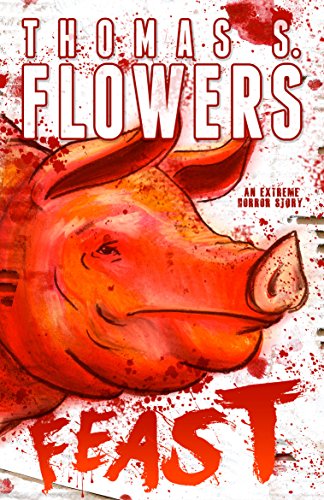 OR free by subscribing to my newsletter!