Okay, seriously…have you seen the new Kong? For starters though, i’ll admit I’m rather late to the party. However, as I had the gumption to finally watch the latest of Kong movies, Kong: Skull Island, I felt compelled to write down some of my thoughts regarding said movie. There are no spoilers here, per say. Kong holds no mystery that hasn’t already been shown in the many previews and trailers that came out prior to the movie’s release. So, I don’t feel bad talking about it.

Here’s a synopsis provided by Vudu:

When a scientific expedition to an uncharted island awakens titanic forces of nature, a mission of discovery becomes an explosive war between monster and man. Tom Hiddleston, Samuel L. Jackson, Brie Larson, John Goodman, and John C. Reilly star in a thrilling and original adventure that reveals the untold story of how Kong became King.

The purpose of all synopsis’, be it book or movie, is to give the would-be audience a small taste of what’s to come without revealing a whole heck of a lot about what they’re about to get into. But as far as synopsis’ go, the one provided by Vudu isn’t too shabby. Filled with awesome action-ny moments and silhouettes of the famed beast. What it doesn’t reveal though is the personal stories that are wrapped up in the (forgive the pun) monster of a movie. Allow me…

Skull Island opens in the year 1944. The world is still at war for the second time and we watch as an American jet fighter comes crashing down to earth while the pilot parachutes not far away. But he’s not alone. Crashing into the sand a moment later, and parachuting as well, is a Japanese pilot. The two had been apparently dog-fighting in the skies above the island and are ready to finish the job, except neither of them are any good at killing the other. The battle ensues over a cliff overlooking a wondrous jungle that looks like something out of Jurassic Park. The death duel is interrupted by the arrival of the star of the movie, Kong.

This opening scene is important, but we’ll get back to that…

Rolling along, the timeline jumps as the opening credits is filled with historic film clips from Truman to Eisenhower to Kennedy to LBJ to Nixon, juxtaposed with scenes of scientists  working around the clock to bring us modern miracles. With dashes of civil unrest to spice things up. Basically summarizing how great humanity is and how far advanced we are, despite the fact that we still end up in wars trying to kill each other.

Following the credits, the year is now 1972…or 74, I can’t quite remember. Bill Randa (played by the always wonderful John Goodman), along with scientist Houston Brooks, convinces a Senator to fund an expedition to a recently discovered island. As we quickly discover, Randa is a bit of a wash out, having worked for this particular secret sector within the U.S. Government since after WWII, but having yet to produce any evidence, nothing of empirical data to show that he’s not some crack pot. You can understand the motivation he would have to prove he isn’t insane. That he when he was a young seaman had seen something unexplainable. And you might even empathize, a little. But for me, while I will always enjoy seeing Goodman on screen, I didn’t totally get his character. Strangely enough, while Goodman’s character is truly the catalysis that sets things in motion, his story isn’t the message playing out.

In the midst of the deal with the Senator, Goodman requests a military escort to the island…for, you know, exploration and shit. As the year is 1970-something, you can safely assume he’s going to get a platoon of badass Vietnam War soldiers. And not just any ole soldiers. He’s getting the modern cavalry, the mobile infantry, Air Cav, baby. AND, not just that, but he’s getting Lt. Colonel Packard (played by the very ageless Sam L. Jackson) who’s simply not ready to hang his awards on the wall, so to speak. The war, as he says, was not lost but abandoned, thus being assigned to this “expedition” mission is just the thing he needs to keep the dream alive. Packard reminds me a lot of a mix between Kilgore from Apocalypse Now and Captain Ahab from Moby Dick. 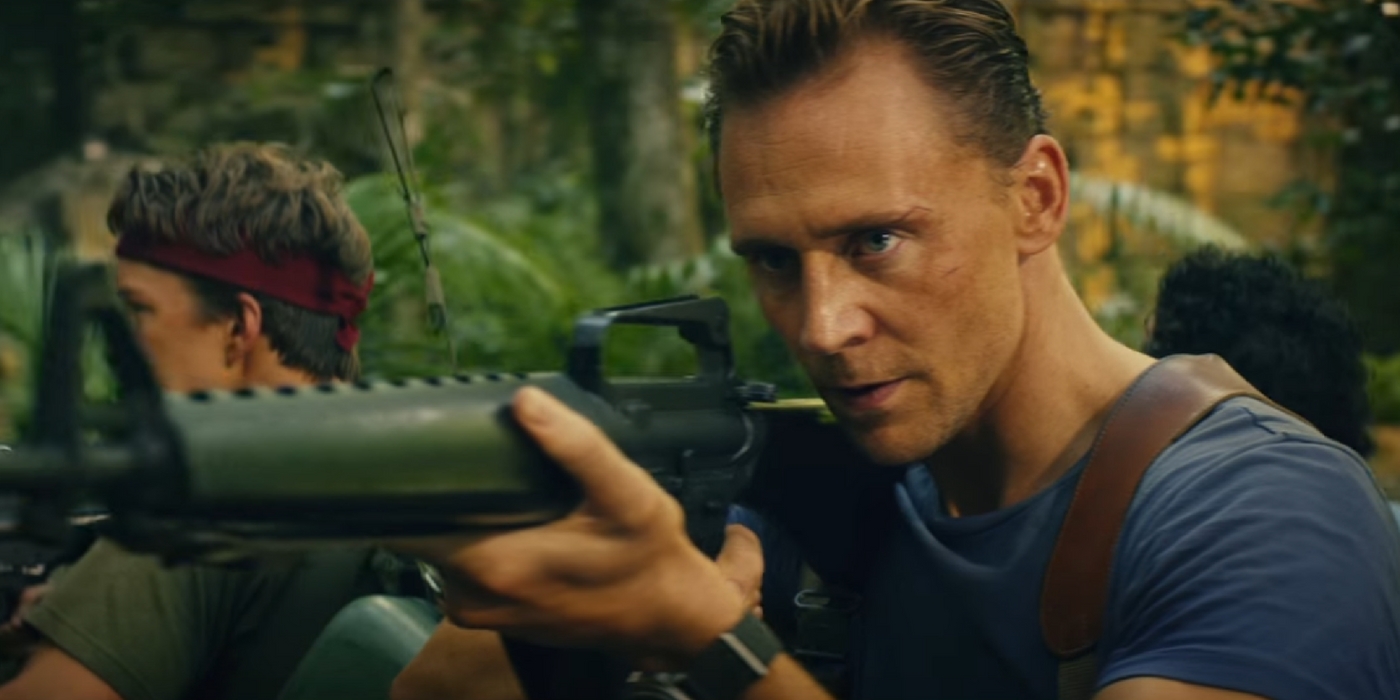 Kong isn’t without its overused tropes. Tom Hiddleston’s character (Capt. Conrad) as the gristle tough guy specialist feels very overplayed and it doesn’t take a much more handsome fellow such as myself to figure out why Tom’s even in Kong in the first place. Hiddleston is a popular actor who’s no doubt willing to spread his acting wings away from Marvel whenever he can. He’s not without his charm, I’ll give him that. And he does bring some value to the plot, as a former solider who lost his father in another war went to war to find answers and walked away empty handed only to be recruited for a very bizarre mission. Yup. He also has a line later on in the movie that caught my attention as being actually deep and meaningful. He says:

“No one really comes back from war, not really.”

Its a sentiment that I’ve struggled with personally as a Iraqi War veteran. Did I come back from war? Conrad’s not just talking about lost father’s, the ones that physically never returned, he’s also talking about the one’s who did make it back, but not in the way they were before. Something about them is changed. War changed them. And sometimes letting go of that war is the hardest thing a solider can do. Somethings cannot be let go. I’ve been very fortunate to have the support of my wife and family, and the use of writing to help me cope with the trauma of living without a war…because that’s what it boils down to, right?

Anyways, back to our review…

Another annoyance I found with the movie was how the “Skull” island had remained undiscovered. Surrounding it is a perpetual storm, an never ending hurricane. Ships don’t go there. The ones that do, never return, etc. etc. Its a cool effect, for sure, but felt very unrealistic. Yes. Yes. I know. We’re talking about a movie starring a giant mythical gorilla-like creature. Still…there has to be some anchoring of reality to pull off the spectacular and I felt the way they shielded the island was kinda tacked on and quickly skimmed over. Maybe I missed something, but I think they could have done something a little different and not so strangely dramatic. Couldn’t the island had been simply uncharted?

What really works is the pacing. Kong doesn’t allow for too many pauses. There isn’t some huge build up of searching the island for this mythical creature. He practically shows up within seconds of the squad of helicopters flying through the canopy dropping “seismic” bombs. And when Kong arrives, he is really pissed. Smashing whirley-birds until none remain. The survivors are spread out and quickly try to regroup. Some never do. As Kilgore, I mean Packard collects the dog-tags of his fallen men, his course of action swiftly evolves into a mission of revenge. The rest just want to go home, but as good soldiers, they’ll follow their commander to the bitter end. As this is a spoiler free review, I’ll let you find out the rest on your own. However, I do want to touch on John C. Reilly’s character as the thirty-something year marooned fighter pilot. In the previews they show a snippet of him, but in the movie he actually has a huuuuge part. With the snippets I feared he was going to be an over the top obvious comic relief trope; he’s not. Yes, he’s strange and silly and Reilly plays the part perfectly, but there’s something more to him. It’s part of the message that has been building up throughout the movie. In the last scene (the after credits scene doesn’t count as its just publicity for the growing franchise), as the end credits roll, Reilly, after thirty some years on Skull Island, is finally reunited with his wife and son. There’s no dialogue here, you just…watch. And its fantastic. Some never return home from war, but he did. There’s a trinity to this message. Packard represents the extreme right, that is the solider unwilling to “let things go.” Reilly’s character (the marooned Hank Marlow) is the extreme left, wanting nothing more than to “let things go.” And then we have Captain Conrad, Tom’s character, as the solider seeking answers. Its a classic method of storytelling and it works extraordinarily well in the movie. And its kinda surprising too, to find this level of metaphor and message in a movie about a giant ape.

There is a lot more that was left out here, but why ruin the experience? Go and find out what’s really going on on Skull Island for yourselves. It’s probably not what you think. For me, it was a highly enjoyable period piece with a deeper core message than most give credit. Oh, and there are giant creatures that wreck shop with stunning graphics and loads of action.